Diana E. E. Kleiner is the Dunham Professor of History of Art and Classics at Yale University, Founding Director of Open Yale Courses, and former Deputy Provost at Yale.  She is the author of numerous books on Roman art in its political and social context including Roman Sculpture (Yale University Press), the fundamental reference on the subject. She has done seminal work on Roman women, centered around the ground-breaking exhibition, I Clavdia: Women in Ancient Rome, and is the author of Cleopatra and Rome (Harvard University Press), which opens a new perspective on one of the most intriguing women who ever lived. Professor Kleiner has resided in Rome and Athens and has traveled extensively throughout what was once the Roman Empire, experiencing firsthand nearly every site and building featured in Roman Architecture. Her expertise, observations, and digital images are now presented in a companion interactive e-book, Roman Architecture: A Visual Guide (Yale University Press, 2014). 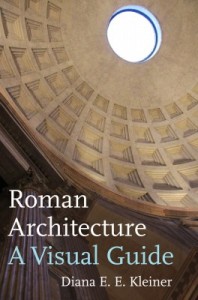 Purchase from iBooks
for iPad, iPhone, or Mac with OS Mavericks or higher